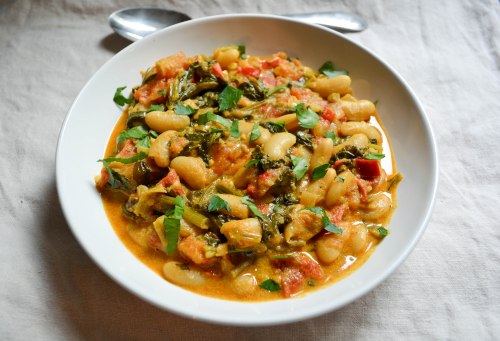 I had a ton of cannellini beans leftover from pasta e fagioli and I had this idea for an Italian/Indian fusion using the cannellini beans and some kale. Something like a methi mushroom but without the methi (fenugreek leaves) and the mushrooms and instead the kale and beans.

The plan was to load up on lots of fresh dark greens for the next week of cooking—chard, kale, cabbage, spinach, etc but my son became uncommonly interested in helping select these items from the grocery store and distracted me from my shopping list. He must have bok choi. Some minecraft-inspired thing, I forget what. Does Steve eat bok choi? Can it be collected? Thrown at zombies? Whatever, I thought, as long as he wants to eat it, placing the bok choi in the shopping cart and absentmindedly dropping a dark bundle of flat leaf parsley beside it.

And so I forgot the kale in the end… Thanks minecraft… Spinach and parsley would have to do, I decided.

This is a fairly mild curry, with a pleasant warming heat from the little bit of chili and ginger and tang from the yogurt. It becomes more flavorful over time so you can make it the night before or in the morning and simply heat it up for supper. I recommend it as a side dish with other curries or serve on its own with rice or flatbread.

Ingredients
Serves 4 as a side

1) Mix the cannellini beans (use dried that have been soaked and cooked as they are much sturdier and more flavorful than the mushy stuff from out of a can) with the yogurt and some grinds of salt. About a cup or so. Let sit while you make the curry.
2) Heat up about 3-4 tbs of oil or ghee in a heavy bottomed frying pan and add the whole spices (cinnamon stick, bay leaf, cardamom and cloves). Gently cook on low for a few minutes to flavor the oil. Remove the whole spices.
3) Add the garlic, ginger, chili and onion and fry until soft and slightly golden, about 10 min on low.
4) Add the dried spice powders and salt and cook another minute.
5) Add the tomato and when it has broken up and cooked down, add the yogurt bean mixture. Mix together and then add the fresh greens and about a cup of water.
6) Cover and simmer for 10 or 15 minutes, stirring occasionally and checking to see if any more water is needed.

We ate this with the usual basmati rice, tarkka dal and steamed broccoli. 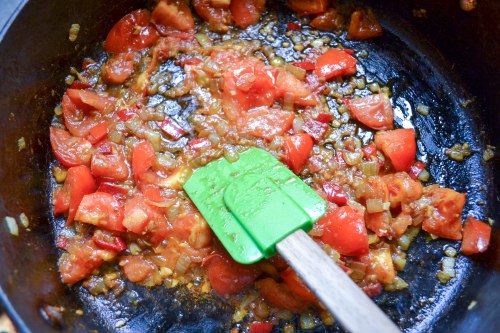 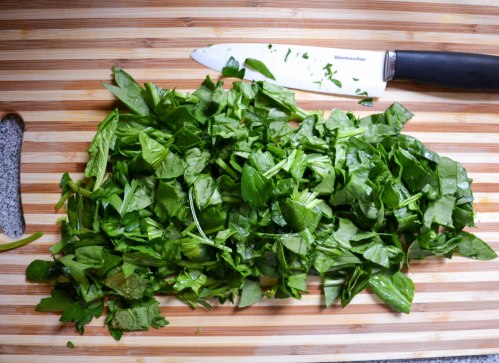 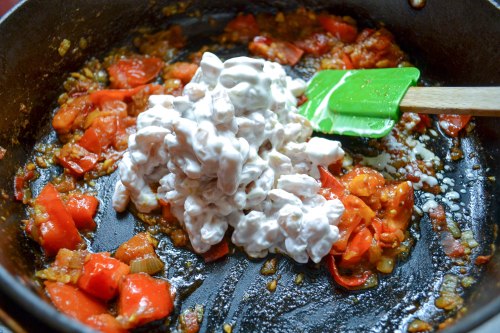 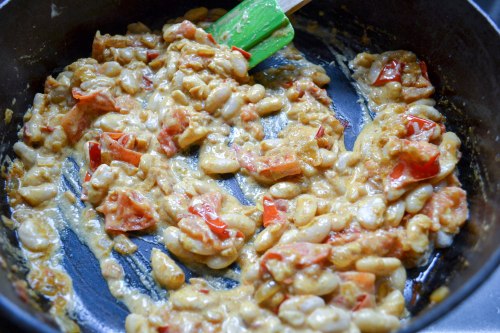 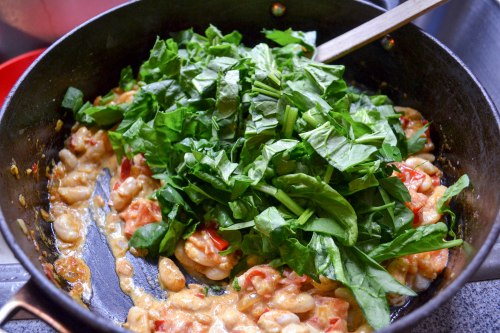 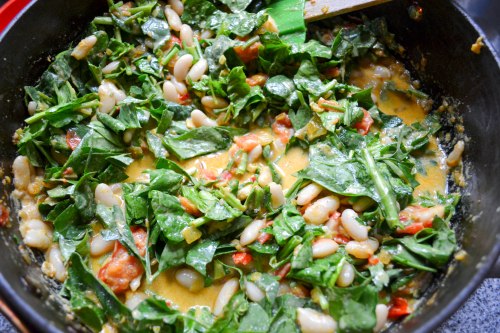 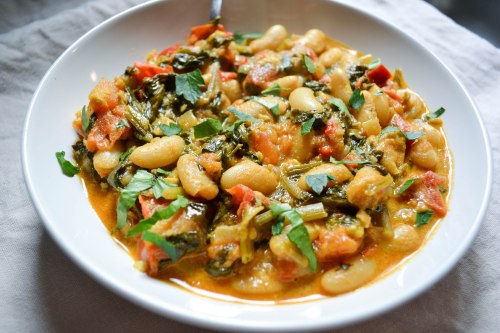 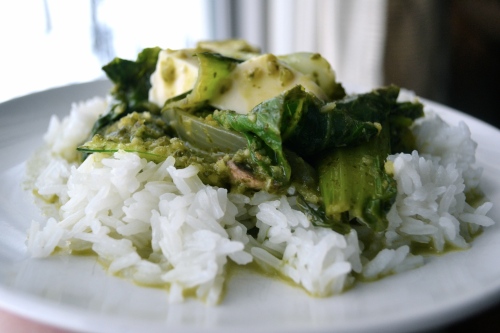 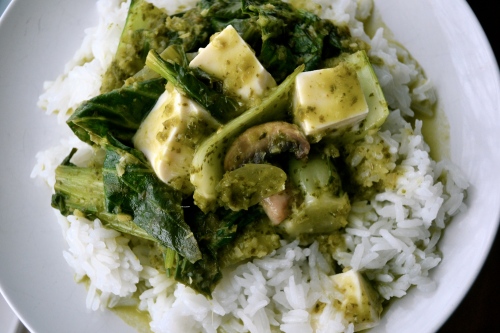 This is flavorful and so dang healthy… lemongrass, galangal, lime juice, basil, cilantro, jalapeno, garlic, etc… The fragrance and taste are so much more than what you see on your plate.

If you’ve never made a Thai-style curry paste from scratch before, give it a whirl. It’s easy—the only hard part being locating ingredients. I saw galangal root, fresh lemongrass stalks and jasmine rice at the Korean H Mart the other day and destiny took over. Any leftover galangal (or curry paste) can wait it out in the cold darkness of my freezer till next curry time.

There are three phases to putting this together: 1) Make the paste, 2) make the curry sauce and 3) cook the Jasmine rice (or basmati, or quinoa, or cous cous).

1) Add everything to a food processor or blender and blitz until completely blended. The end. 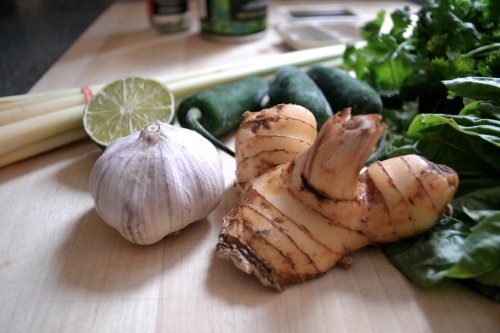 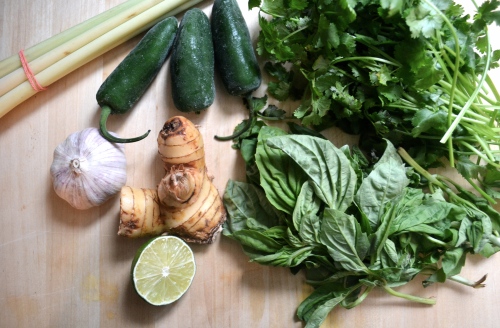 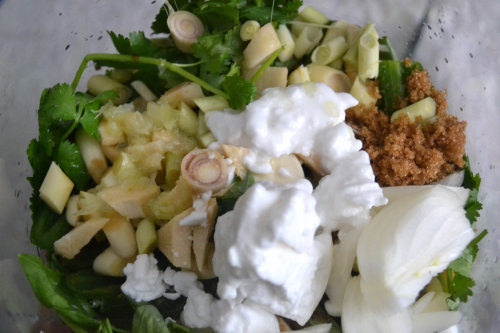 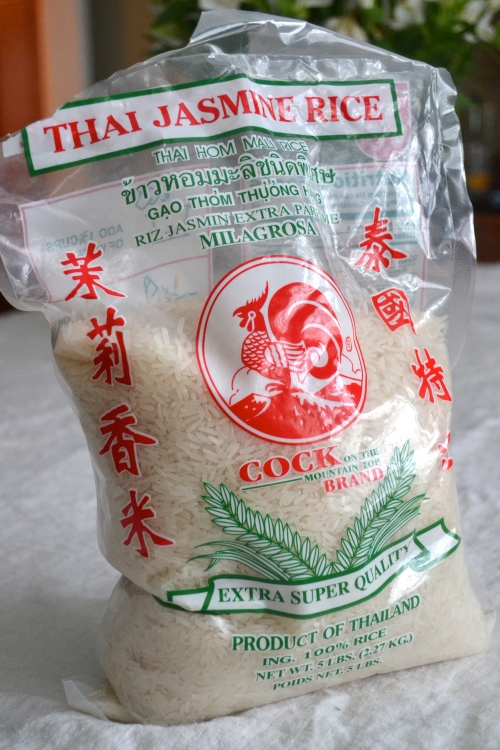 Putting the curry together*

All the green curry paste
3/4 can coconut milk (or 1/2 can coconut cream and 1/2 water)
handful fresh Thai basil (or basil)
1/2 cup vegetable stock
a few kaffir lime leaves (I didn’t have these and it was fine)
vegetables such as asparagus, bell peppers, mushrooms and bak choi
1/2 a block of firm tofu, cubed (optional)
Olive oil
* Cut the recipe in half and add in only half the curry paste if you are cooking for only 2 or 3 people.

1) In a large frying pan or wok, heat up a glug of olive oil and add in all the homemade green curry paste. Fry the paste for a minute on medium heat.
2) Add the coconut milk, stock (and water if necessary).
3) Add the chopped vegetables and cook on a medium low heat till just tender. Add the tofu and fresh basil in and cook another minute or two.
4) Serve over jasmine rice, cous cous or whatever you like. Who cares? It’ll be awesome. Don’t forget a cold Thai beer!