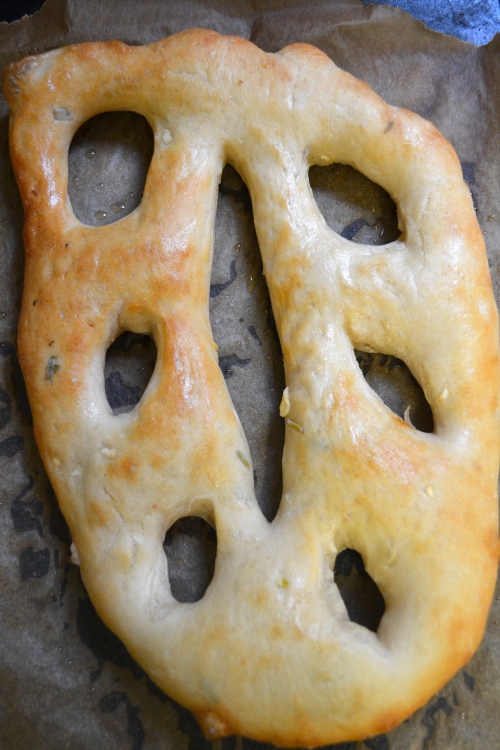 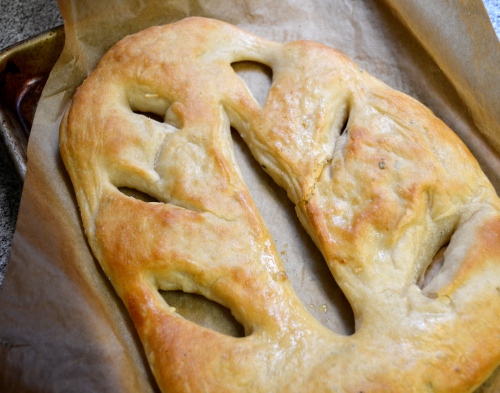 I. Was. So. Excited. To pull these babies out of the oven. I haven’t eaten this in YEARS. It’s a yummy flatbread, originating from the south of France. I’ve never made it before, but was thinking about it the other day and well, the memory calls to the heart which commands the fingers which get out the flour and the yeast and etc. When I ate this in a French restaurant it was with caramelized onion and gruyere. I’ve since seen loads of olive and sun-dried tomato versions. This is my humble fresh rosemary and garlic offering. Was it sad that the only people around to share my excitement were little people? I interrupted my son’s playdate and said something like, “Oh my god, do you guys want some of my bread?!”
My son said, “Their grandma said they can’t eat anything, but I can eat it instead.”
A composed six-year old said, “I think just a little bit is ok.”
“Great!” I said, tearing off pieces of fougasse, slathering it in butter for their little hands.
“Come on, hurry up,” said a four-year old with enormous blue eyes.
My son said, “Don’t tell your grandma,” through his mouthful of bread.
They disappeared around the corner.
“Wait!” I called, “What do you guys think? Is it good?!”
By dinner time, I wasn’t too hungry, as I’d kind of gorged on amazing bread and a glass of Côtes du Rhône. Who cares? This would be perfect as a ‘grazing’ supper with wine, some fruit, nice cheese and olives. Something simple to enjoy one of the great simple pleasures in life: fresh-baked bread. Especially bread that looks as beautiful as this. I told my daughter it looked like a leaf. She said it looked like a fossil.

*I used my Kitchen Aid to mimic something I saw the French Pastry School do. Many recipes for fougasse involve it rising in the fridge overnight, but the French Pastry School has a recipe for kneading the dough on a fast speed of the Kitchen Aid and they only have it rising for a few hours. If you don’t have one, hand-knead and put in a covered and oiled bowl in the fridge overnight before starting step 4.

1) If using fresh yeast (you lucky dog), rub it into the flour in a large bowl. Otherwise, add the flour, dried yeast and salt together in a bowl and mix.
2) Add hot water (hand-hot, not boiling) and use a wooden spoon to mix to a wet sticky dough. Add a little bit more water if the dough is dry. Let rest for a couple minutes while you get the rosemary and garlic ready.
3) Scrape into a kitchen aid and using a dough hook, knead the dough on the first setting for one minute. Then turn up to number 3 and knead for a few minutes.
4) Add in the chopped rosemary and garlic and knead on the first setting for another minute or two. (Or knead the rosemary and garlic in by hand)
5) Scrape into an oiled bowl and cover tightly with a cloth and something heavy resting on it. Let rise for at least an hour. 2 hours is better.
6) Cut the risen dough (still sticky) in half with a hand scraper or a thin wooden utensil. Set one half of it aside for now. Starting with the first half, gently fold it over itself to form a nice round shape. With a rolling pin, roll it out on a floured surface gently to form a rectangle shape. Take a pizza cutter or sharp edged scraper and slice down the middle of the bread. Gently pull it apart. Then make three diagonal slits on each side of that cut and gently pull apart. The dough will rise again so the holes need to be fairly big. Place on a tray covered with baking parchment. Repeat with the other half of the dough. 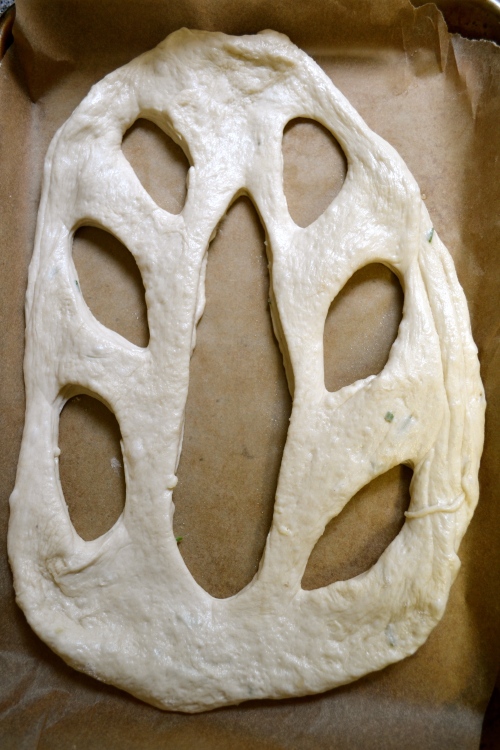 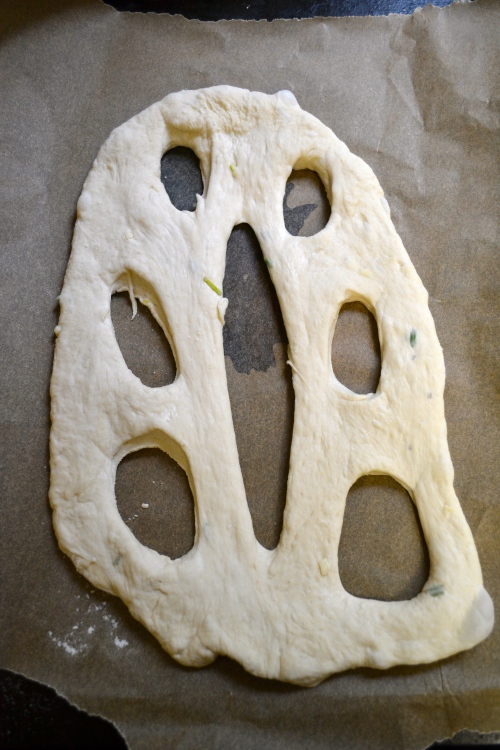 7) I’m not sure if my idea for ‘proofing’ in my oven helped much, but this is what I did and it worked: Warm the oven, then turn off the heat and set a small pan of boiling water in the oven for steaming. Put the two trays of formed dough in the oven to ‘proof’ for 30 minutes. They should come out a bit puffy with a slight skin, like this: 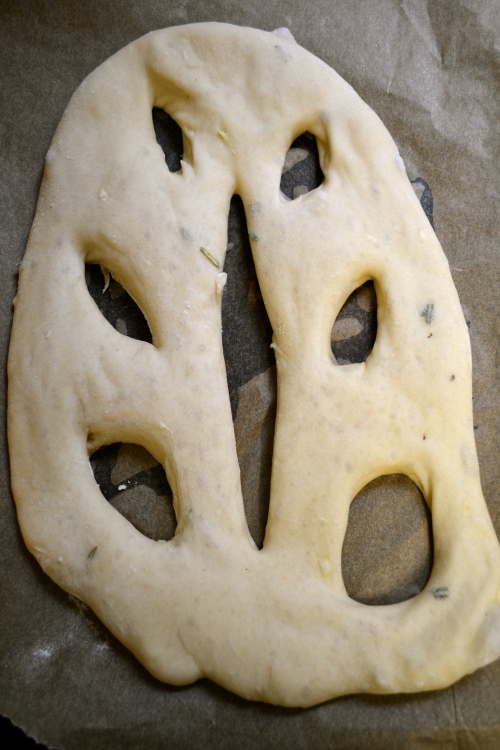 8) Take out of the oven and preheat the oven to the highest setting.
9) Gently brush the formed dough with extra virgin olive oil and sprinkle with sea salt.
10) When the oven is hot, put them in to bake for about 10 minutes, or till golden brown. If they are on different racks, switch them halfway through.
Enjoy!! 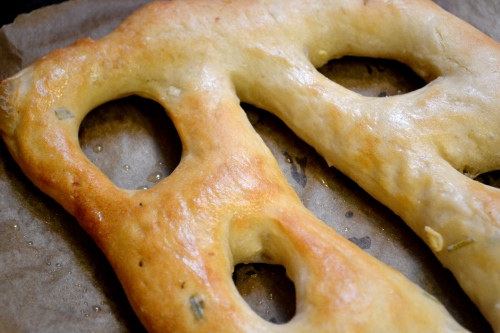 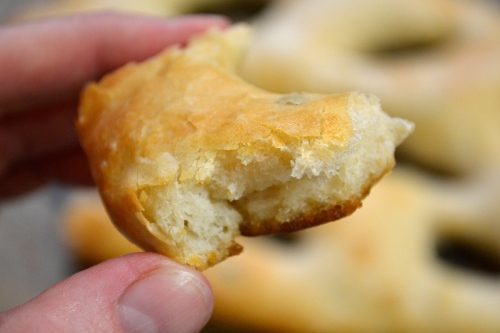