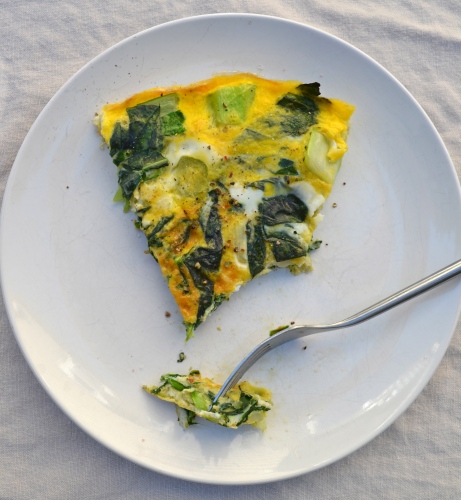 Say what? Korean frittatta? Well, kind of. I got inspired from this Food and Wine magazine’s asparagus and bok choi frittata when thinking what to do with all my fresh green goodies. Two exciting things had to happen for this frittata:
1) There was a farmer’s market at my kids’ school and they brought home a load of purple bok choy, and
2) I had recently been to H Mart, a huge Korean supermarket in Edison, NJ, where I picked up (among MANY other things) Korean green onion, enough sesame oil for a year, go chu jang (Korean bean chili paste) and Korean spinach and green chili.

A word or two on Korean green onion. These babies are huge. It’s like if Jack were a spring onion, this is who would be waiting for him at the top of the beanstalk. I plan on using some of these onions for savory Korean pancakes but I could spare one for a frittata. Meanwhile, the purple bok choy… I used one bunch already for a vegetarian ramen soup and I wasn’t feeling like sauteeing or braising the other one. Into the frittata as well. Here’s a pic of my treasures (I forgot to add the ginger to my portrait!): 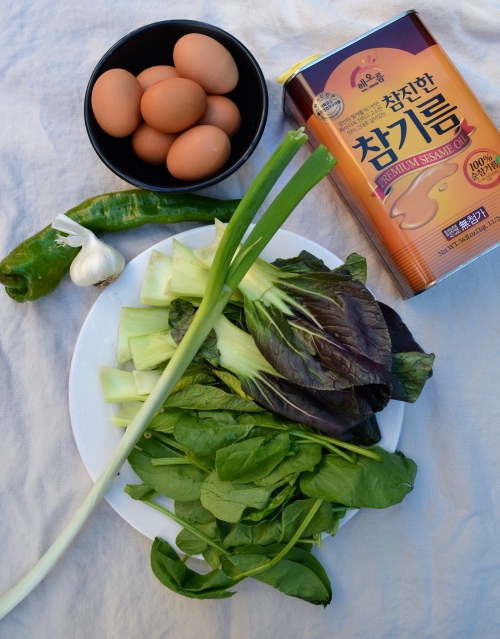 All chopped and nicely prepped:

A close up the Korean green onion, chopped:

1. Heat up plain sesame oil or olive oil and gently warm up the garlic, ginger and chili or bell pepper for 1 minute.
2. Turn up heat slightly and add in the spring onion, bok choy and spinach. Gently fry so that the vegetables are just cooked. They should still be crunchy. Pour the egg mixture in, making sure it is even.
3. Put a lid on the frying pan to cook as much as you can on the stove. Finish the top under the broiler in the oven. Don’t burn the bottom of the egg. Don’t overcook the egg either. If you are careful, it is not hard to get it perfect. Serve with a drizzle of toasted sesame oil and go chu jang (or sriracha!) if you want spice.